Anthrax - "For All Kings" 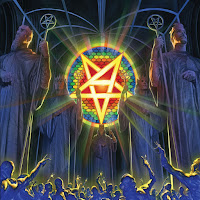 The last album I liked from Anthrax was Persistence of Time. After that, vocalist Joey Belladonna left the band and I pretty much forgot about them. Not too long ago Joey rejoined which got my attention, but the band started using their pentagram logo - which kind of put me off a bit. However, after seeing some stellar reviews from both Christians and non-Christians, I decided to give this disc a chance. Also, I was on vacation and Iced Earth didn't have a new CD out! (Har har!) Anyway...holy smokes does this album rock. In fact, it could have pretty much come right after Persistence in terms of sound. Joey sounds just as good, if not better, than he ever has. The songs are tight and heavy... and oh my word the riffing. Some of the finest riffs I've heard this year. All the aggression and fury you'd expect from the band is there. "Defend/Avenge" officially replaces "Gridlock" as my Anthrax fight song. Not sure why they started using the pentagram logo - they don't talk about the occult at all. Mostly it's the same lyrical themes they've always explored. Anyway, good tunes is good tunes and this album absolutely smokes! I can't confirm this but I suspect "You Gotta Believe" and "Monster At The End" are shout outs to PaRappa the Rappa and that old Sesame Street book with Grover in it, respectively.

Useless Fact: If you have a strong stomach and a penchant for horror movies, check out the video for "Blood Eagle Wings." It is possibly the most disturbing and brutal music video I have ever watched. Also stars comedian Brian Posehn.