The Genesis Project - "Selling England By The Pound" 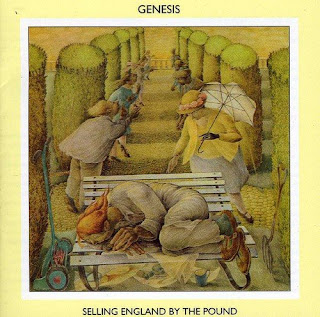 1. Dancing With The Moonlit Knight
2. I Know What I Like (In Your Wardrobe)
3. Firth of Fifth
4. More Fool Me
5. The Battle of Epping Forest
6. After The Ordeal
7. The Cinema Show
8. Aisle of Plenty


I was a little nervous listening to this album for the first time. My experience with Foxtrot, while pleasant, didn’t really move me. It’s a classic to be sure but I always felt like I was an outside observer rather than an active participant. Selling England is the penultimate Gabriel-era disc so I was bracing myself for the inevitable emotional disconnect I would have with the music as I marveled at the talent. Imagine my surprise when I was immediate hooked by the first song, “Dancing With The Moonlit Knight.”

“Can you tell me where my country lies…”

Somehow I was hooked. The opening guitar riff was mournful and melancholy, as were Gabriel’s vocals. The song seems to deal with commercialization and extreme capitalism (I think), but it almost didn’t matter. I could feel the meaning. I was there. It didn’t stop with the first track either. I was mesmerized throughout the album. I think some of this has to do with the more down-to-earth nature of the lyrics. “I Know What I Like” is about a gardener who can always hear what people say about him (there’s probably more to it, I admit) while the epic “The Battle of Epping Forrest” is about a turf war between rival gangs. The lyrics, while intelligent and conceptual, were a lot easier to identify with, with very little in the way of sci-fi weirdness or crazy left turns. Some might not like that as much, but I appreciated it.

I suspect another reason why I liked this one a lot more was because Selling England seems to be more music focused than concept focused. Some of the “aggressive intellectualism” of Foxtrot recedes to let the music take center stage. Fortunately, the melodies themselves are more compelling, more emotional. Take “The Cinema Show” and “Firth of Fifth” for example. Both are epic-length songs and are both fairly light on lyrics, letting the music itself carry the weight. The music was constantly interesting - I never felt like an outside observer. I felt like the album was always beckoning me, inviting me in to fellowship with the souls of these five musicians.

Beginning with the first track, the album has kind of a back and forth. One track will be epic and progressive, the next one shorter and more accessible. This approach kind of gives the listener a breather between epics, settling into a pattern – the shorter songs serving as commercial breaks of a sort. One of which, “More Fool Me,” is sung by Phil Collins. It’s a simple, sort of down track about love gone sour. It sort of foreshadows some of the work the band would do under Collins’ leadership. While the closing number, “Aisle of Plenty,” serves as a bit of a reprise of “Dancing With The Moonlit Knight” bringing the album full circle.

As a result I can honestly say that Selling England By The Pound is my favorite of the four albums I’ve listened to so far.  It’s kind of a surprise because I’ve tended to prefer the Phil Collins-era material. I’m a little sad to have to leave it behind and move on to other albums. Especially since my next one is We Can’t Dance and it’s one of the band’s worst reviewed platters. I can say for certain that I will definitely be listening to Selling England…  long after this project is through.

Useless Fact: The lyrics for "I Know What I Like (In Your Wardrobe)" are based off the cover painting.