XL and Death Before Dishonor - "Offensive Truth, Vols One and Two" 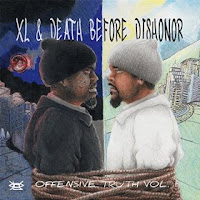 XL & DBD was a unique little piece of Christian rock history. It was a metal/rap fusion at a time when no one was doing that sort of thing. I always thought it was too bad that this was the only album widely released (there's the fairly obscure Live From Ninevah, What's Next? if you can find it). If you liked that first release, make sure you get a hold of Offensive Truth - a double album of rock/rap goodness. You really need to get both because even though there are two volumes they really are one set. It's great to put on in your smoking room with a fine beverage. Listen to volume one, take a quick break, listen to volume two. Offensive Truth kicks open the door with the first track, "In Need of Therapy" and doesn't stop until the end. The album isn't quite as thrash as Sodom and America but it makes up for it with melody and sheer groove. XL is actually a pretty good singer and the melody gives the songs some variety. As far as lyrics go, XL's faith has taken kind of a strangled route from the debut album to now. A route that has involved alcoholism among other things. A lot of the lyrics deal with his struggles and eventual return to the faith. It's the same hard-hitting, pull-no-punches type of stuff as before, only with more experience to back it up. I'm really glad XL is back and I hope this is the start of some regular music output!

Useless Fact: XL has called in a slew of guest musicians for this duology. Among the bigger names are Jimmy Brown (Deliverance), Rex Carroll (Whitecross), and Jim Chaffin (The Crucified).
Posted by The Old Man at 8:16 AM

Labels: XL and Death Before Dishonor