Panic! At The Disco - "Death of a Bachelor" 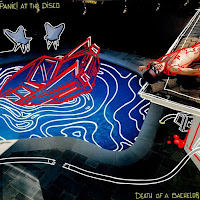 Well, I thought I was pretty much done with Panic! after their last album. Boy, was that a stinker. Ugh! So when I heard they had a new one I really didn't pay it any mind. However, The Rock Critic on You Tube gave it a favorable review and he is one of the few people whose reviews I trust. My wife wanted it too, so that helped. I am happy and relieved to say that Death of a Bachelor is way better than Too Weird to Live, Too Rare To Die. Whereas that album sounded like a warmed-over Fall Out Boy record, this one sounds alive and vibrant. Brandon Urie is the sole member of the band at this point but the songs are so much more interesting. The hooks are better and Brandon's vocals are just amazing here. He's really giving it his all. I especially like it when he slows it down just a little bit and puts a little Frank Sinatra in his performance. Some of the vaudeville influences from their debut album show up too, which I appreciate. I always thought that made them stand out more. Not to say this album is a return to A Fever You Can't Sweat Out because it's not, but you can hear it a little bit in songs like "Crazy = Genius" and "Don't Threaten Me With a Good Time." I'm glad that the last album was a misstep instead of a downward spiral.

Useless Fact: The album's title comes from the fact that Brandon Urie was getting married. Thus, no longer a bachelor.