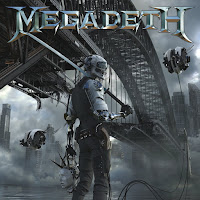 Wow...well...I guess Dave Mustaine took the criticisms of Super Collider to heart because Dystopia is a lean, mean, thrash machine! Seriously, this is probably the heaviest and thrashiest album of the band's latter period. I would also go as far to say as it's one of the best of their career. The band is on the top of their game here with solid heavy riffs. The guitar tones here are a lot meatier and thicker than they've ever been. Couple that with a bit more modern production and...whoa...heavy. We've even got some throwback acoustic passages and a full on thrash instrumental in "Conquer or Die!" I will say that some of Dave's lyrics are kind of pushing the boundary into crazy paranoia conspiracy theory. Granted that's always kind of been his style but, honestly, the man has been able to make crazy paranoid music for decades - maybe the system is not after him, y'know? Anyway, it's good to see the band back with a fierce thrash album that could be a contender for a pick of the year!

Useless Fact: "Foreign Policy" is a cover but I don't know who did the original. Probably my least favorite song on the album and not one of their better covers.
Posted by The Old Man at 8:53 AM