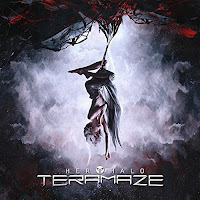 Teramaze has been a band that has sort of floated on the outside of my perception for years and years. I even owned a Teramaze album way back in the day (Tears To Dust, I think it was), but wasn't overly impressed with that album to go chase down more. They've had a few new albums lately and I've even had Esoteric Symbolism on my Amazon wish list for a while. I've seen a lot of "Best of 2015" lists and Her Halo is on a lot of them. Naturally, I decided to check the album out with the first one being the title track of this album.

It was, quite possibly, one of the best and most moving songs I've heard. The hook is big as life, the guitar work is amazing. I just had to have it. Best of all? The entire album is that good. The soaring, melodic vocals from a young man named Nathan Peachey are exquisite. I don't know where this dude came from, but he's got it. In spades. Then there's the intricate guitar riffs and leads. The strong hooks. I can't say enough good things about this album. My only regret is not getting it sooner so it could be on my own "Best of 2015" list. Though it might be on this year's list... you know how I do things. Cool cover art too!

Useless Fact: This is a concept album about a trapeze artist in the circus and how she is victimized by a destructive relationship with the ring leader. At least I think that's what it's about.
Posted by The Old Man at 1:50 PM