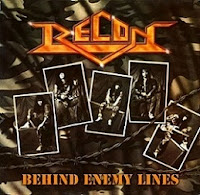 Long ago... when the world was new there were such things as Christian book stores. These were wondrous places with all sorts of Christian merchandise, like Christian music. I frequented these stores in my youth. You know this if you read this blog regularly. While at one of these stores, I passed over Recon's debut album in favor of Bride's Silence Is Madness. I cannot tell you what prompted the decision other than Bride had the cooler cover. I did eventually hear Recon on the Hot Metal Summer III compilation. I liked the song, "Take Us Away," but for some reason never bought the album. I'm glad Roxx Productions decided to reissue this album as it gives me a chance to hear it. It's very Warning-era Queensryche - especially with Vett Roberts' soaring vocals and George Ochoa's guitar licks. I think if I would have bought this on that fateful day it would have been a favorite for sure. There is a ton of skill on display here. The album has been remastered but, honestly, it still sounds a little rough - though what can you do with twenty-five year old tapes? Glad I got a chance to pick this up all remastered and spit-shined. It definitely deserves its classic status.

Useless Fact: As I understand it, George Ochoa had the actual master tapes for this album and baked them just so they could be used for this remaster.
Posted by The Old Man at 3:06 PM