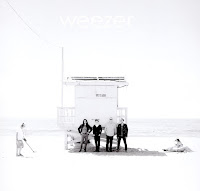 It's no secret that I loved, loved, loved Weezer's last album, Everything Will Be Alright In The End. It was exactly the return to form that longtime fans wanted to see. It restored people's faith in the band, including mine. People who had given up on these guys. It's a stellar album and a hard act to follow. So what does the band do for their follow-up? Something completely different. This album is a short, snappy, breezy pop (ish) album that was meant to be enjoyed on the beach. It's got that definite Beach Boys vibe - you can almost see yourself on the pier and smell the ocean while you listen. I was nervous that this album wouldn't be up to snuff, but it totally is. In fact, while it's not quite "classic" status, this is one of the few later-era albums that maintains its quality all the way through. We've even got kind of a throwback to Pinkerton with "Do You Wanna Get High?." Like I said, it's not in my top three (Blue, Pinkerton, and EWBAITE) but it's a solid four and better than I expected.

Useless Fact: "Do You Wanna Get High?" is reportedly inspired by Rivers Cuomo's struggle with pain pill addiction.
Posted by The Old Man at 9:49 AM