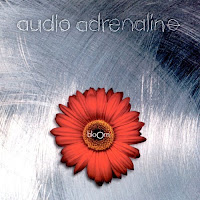 Bloom has a reputation for being the "grown-up" Audio Adrenaline record. The one where they move away from trying to be a band for the youth group and try to be a band for rock fans. The songwriting is more mature and aggressive. Some songs, like "See Through" are about as hard as the band ever got. I saw them at Kingdom Bound many moons ago and they put on a good show. Despite my affection for Don't Censor Me, Bloom is clearly the superior album. I don't really know what became of their sound after this because I had gotten out of music for a few years. What I heard through the grapevine (like "Hands and Feet") didn't impress. I guess they've recently put out a new album with DC Talk's Kevin Max on vocals. Don't know how that fared either.

Useless Fact: "I Hear Jesus Calling" is specifically listed as a demo. I guess the band liked it so much they kept that version for the album.
Posted by The Old Man at 9:47 PM