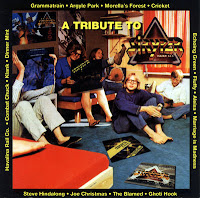 Hmmm...not sure what's going on here. Flying Tart wasn't exactly known as a metalhead's record label. Just the opposite, in fact. It was home to Fluffy (later Duraluxe), the final Circle of Dust album, and a few other very obscure, off-the-beaten-path artists who may or may not have been Christian. So... I'm not sure what the concept of this was because I would be hard pressed to call it a "tribute." A "spoof" perhaps? A big joke? I'm not sure. I would love to hear from someone who worked on this because I am puzzled. The bands are not metal bands or even really bands who were influenced by Stryper. The covers range from great (Argyle Park alone holds that honor) to interesting (Steve Hindalong and Morella's Forest) all the way down to awful (pretty much everything else). I'm not opposed to taking a metal song and giving it a new twist but the "twists" aren't very good. Also, the recording quality on most of these tracks is demo and worse. I can definitely see where an avid fan of Stryper might take this collection as an insult. However, I do find it to be an interesting and amusing piece of Christian music history, so I got a copy for the vault.

Useless Fact: If you want to hear "Lonely" without tracking down this disc, get the official Klayton sanctioned reissue of Argyle Park's Misguided. Which, honestly, you really should have done already. Geez, what's wrong with you?
Posted by The Old Man at 5:40 PM