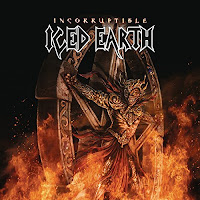 I've got kind of a weird relationship with Iced Earth. If you'll recall I wasn't wild about their last two albums and only bought them because I was on vacation and bored (though I have re-evaluated Dystopia and really like it now). In fact, I wasn't even going to bother with Incorruptible because I'd figure I'd just get it a year later on whilst on vacation. However, I'd been hearing some really good buzz about this one with some fans saying it was their best since Something Wicked. Which is super high praise. So obviously I didn't wait until I was on vacation and I'm glad I didn't. I don't know what got into Jon Schaeffer and the boys, but man... this album rocks. There's definitely an energy and vibrancy that wasn't there on Plagues of Babylon. Everyone is at the top of their game and not one track could be considered "filler." I especially like the finale, "Clear the Way (December 13th, 1862) - a song about an army in the Civil War. I'm actually considering this as one of my picks for 2017 if that's any indication.

Useless Fact: "Seven Headed Whore" is marked as "explicit"... for the word "whore" I guess because there's no actual vulgarity in the song.
Posted by The Old Man at 8:46 AM