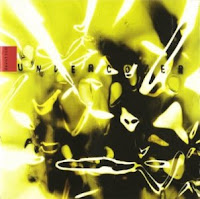 A long, long time ago...back when the world was new, Undercover's Devotion inspired my youth group's logo. See, there's a song called "Purple Flower" on here and along with the mention of a purple flower in The Choir's "If I Had a Yard" we thought there was some sort of something going on. So a purple flower was our logo for "The Hippy Youth Group." Named that because a bunch of other kids from another district were like, "look at those hippies over there." Yes, I know Circle Slide pre-dated Devotion by two years so there couldn't have possibly been any correlation. No need to send letters.

Anyway, this was my first introduction to Undercover. I saw the previous album, Balance of Power, in my local bookstore but chose something else over it. I came into the scene way too late to have ever heard their more punk stuff. Devotion rocks pretty hard and while I didn't love it originally, I've grown quite fond of it lately. Quite a familiar refrain I've been singing in reviews these days. I blame it on trying to reclaim my lost youth. The original is really hard to find but the band has completed a Kickstarted a reissue and that's where my copy came from. The extra tracks are all right, mostly live stuff. I also appreciate that they recreated the liner notes of the original album. I know it's kind of a weird, small thing but sometimes when these reissues come out they redo the liner notes and often they don't look as good.

Useless Fact: As far as I know Ojo Taylor is no longer a Christian and is a college professor somewhere.
Posted by The Old Man at 8:52 AM