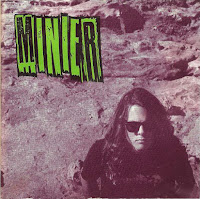 I've long wanted a copy of Minier for the vault but it seemed like the original REX edition was too pricey. Especially for only seven songs. Retroactive once again stepped up and released this little gem and gave it a proper reissue. It's got six demo tracks from the bedroom of Greg Minier himself. The quality is rough as is befitting a four-track recording but not unlistenable. They've also included a couple of interviews for posterity's sake. Greg even writes some liner notes to give a little insight into the recording. All in all a pretty good package and definitely recommended if you liked the raw and thrashy original.

Useless Fact: Apparently there was supposed to be a full length "Minier" album, but The Crucified and Applehead both got in the way.
Posted by The Old Man at 7:10 PM