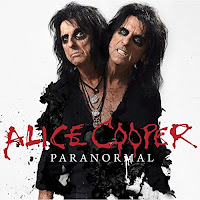 I've been wondering when Ol' Alice would put out a new albums. It seems like it's been forever since Welcome 2 My Nightmare. Paranormal is a pretty straightforward album - no concept, no varying styles - just pure rock and roll. It kind of reminds me of Alice's more seventies stuff, especially with the Alice Cooper band. Speaking of which, they reformed and wrote two songs for this album, "Genuine American Girl" and "You and All of Your Friends." It's funny because this record is pretty simple and it's not really taking Alice Cooper to any place he's never been before, but I really love it. The songs are just so catchy and the production is clear and clean so you can really hear the guitar tones. This isn't a groundbreaking release or anything but I'll be danged if I haven't spun it a ton and have plans to spin it some more. Alice has said in interviews that he really tried to get out of his comfort zone on this album. It tickles me that he's said that because it doesn't seem like this album takes many chances. Not that it needs to, mind you. It's amazing how it can risk almost nothing and still be so dang good. The live tracks are pretty cool bonus. The name of the drummer escapes me at the moment but he is absolutely killing it! See "Feed My Frankenstein" for an example of what I mean.

And let's talk about the packaging for a moment. It's a two-disc digipack with a nice fat booklet full of lyrics. The artwork is pretty cool. Definitely an A++ for packaging here.

Useless Fact: This album was produced by Bob Ezrin who's produced a metric butt-ton of Alice Cooper records. I know that's not much of a fact. *sad face*