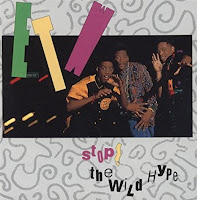 The other day a great mania seized me. For some unexplained reason I had to listen to all the old Christian rap I had on my Ipod. For that entire day and a couple after I listened to everything I had…but it wasn’t enough. I needed more. I suddenly remembered that there were a few old albums that I never got around to the first time. E.T.W.’s Stop! The Wild Hype is one of them. Now before I get into this album, I have to say I think I was a little hard on their debut. I suppose it’s not objectively “great” but you know what? I still listen to it and I still enjoy it. So there. Anyway, Stop! The Wild Hype is better. It’s still not in the upper echelons of Christian hip-hop, though. At this point they are still being eclipsed by the likes of S.F.C. and Dynamic Twins. However, as I said, this album shows improvement. It certainly has better instrumentation all around. A lot more female vocals are added into the mix as well to spice things up. “Destined to Win” is an odd bird in that it’s almost techno. Kind of cool if you ask me. Though I can’t shake the feeling that these guys just haven’t found their sound yet. I think that probably happened on the next album. Speaking of which, I’ll probably have to get that one too…

One of the things that struck me as I listened to this album was how urgent it sounds. I mean...in the first track there's talk of geopolitics that would be right at home on a Jack Van Impe broadcast. But that's just how we rolled back then. Everything seemed more urgent. Jesus was coming back TOMORROW so you need to get ready! The New World order will rise up any day! Persecution of Christians in America is rampant! THE WORLD IS GOING TO HELL IN A HANDBASKET AND OTHER TYPES OF BASKETS AS WELL!!! While many people still hold this urgency, I just don't have the energy anymore. At my advanced age it does indeed seem like the world is going to hell in a handbasket, but I think it's always been that way. Civilizations always stand on the edge of a knife and the sovereignty of God decides when they rise and fall. I'm not sure either of us are right. Wow...that got kind of deep.

Useless Fact: The liner notes indicate that the album is dedicated to D-Boy. Aww... D-Boy. He's been in heaven awhile now. I will certainly expect some sick beats and rhymes from him when (if?) I get there.
Posted by The Old Man at 9:16 AM