Armageddon USA - "Up In Flames" 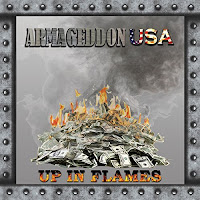 Armageddon USA - Up In Flames
Independent, 2015

Here's a question... why Armageddon USA? Why not just Armageddon? Was there a copyright issue or something? Also, this cover art is... really crappy. It looks cheap and generic - especially when you compare this to the art of The Money Mask which was iconic, unique, and just looked darn cool. Up In Flames came out in 2015, some twenty-plus years after the debut. Not sure why I lollygagged around for two years and didn't pick it up, though. Anyway, it's...okay. It starts off a bit wobbly with a trio of songs that I wasn't wild about. "All Over the World" has a decent riff and groove but the lyrics kind of annoy me. They literally just list terrible stuff happening "all over the world" aaaaand...that's it. Without anything else being said it's kind of like...what's the point? Yes... things are happening. And? "Spinner" fares better but the disc comes screeching to a halt with "Hypnotized." It's a Black Sabbath influenced doom-metal type tune that really slows down the album's momentum and is kind of boring on top of that. Thankfully, the album as a whole picks up with "Wanted Man" which is just dang cool. Cool riff, cool hook, cool song. The album keeps up this level of quality throughout as well so if you can get past those first three tracks you're good. "Revolution (Peace of Mind)" is like a love letter to Psalm 9 era Trouble (I feel like they're using the exact same guitar tone). That's not a bad thing, mind you, it's just something I noticed. The band's lyrics are more political than religious this time around. If you were a fan of Armageddon from way back, go ahead and check this out. If not - you can probably pass this by. Except for "Wanted Man." You definitely need that one.

Useless Fact: Vocalist Mike Vance is pretty active on Twitter, usually talking about politics. He is not a conservative, nor is he a fan of Trump. I do not have a problem with either of those things.
Posted by The Old Man at 7:41 AM