Demons and Wizards - "Touched By The Crimson King" 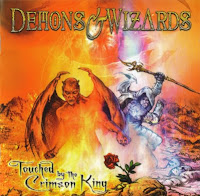 Demons and Wizards - Touched By The Crimson King
2005, SPV

I don't know why I got rid of this CD because I really like it. Demons and Wizards is Jon Schaffer from Iced Earth and Hansi Kursch from Blind Guardian. The combination of the two is pretty cool. You've got Schaffer's lightning fast guitar riffing skills and Kursch's unique vocal style. I definitely like hearing his voice without some of the bombast of a Blind Guardian record. The only song that kind of annoys me is slow interlude in "Dorian." It doesn't seem like it fits and brings the song to a screeching halt for a minute. Also, make sure you pick up the deluxe version with the extra tracks. I don't feel like the album is really complete with out "Lunar Lament" (one of my favorite songs of all time) and "Spacial Architects." You can chuck the other two - "Wicked Witch (Slow Version)" is nearly indistinguishable from the other album version and "Beneath the Waves (Edit)" is the same exact song with the mellow post-lude clipped out. This is the band's second release. Some say the first one is better but I've never heard it. Someday I'll have to check it out.

Useless Fact: The album title and several songs are based on Stephen King's Dark Tower saga. "Love's Tragedy Asunder" is based on Romeo and Juliet, I believe. "Beneath These Waves" is based on Moby Dick. "Wicked Witch" is based off The Wizard of Oz. I shouldn't have to tell you what "Dorian" is from. "Immigrant Song" is a Led Zepplin cover.
Posted by The Old Man at 8:45 PM