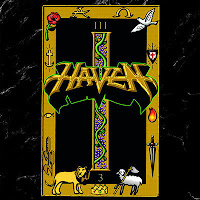 Now here's a little rarity that I'd never thought I'd hear. Haven's third album was recorded from '93 - '95 and finally released independently in '95. It was recorded in vocalist Kevin Ayer's home studio with whatever musicians he had on hand. I never even knew this existed until the early 2000's when I saw it on Scott Waters' website, No Life Til Metal. Retroactive has rereleased this lost gem with a good remaster and updated artwork. I think the new cover looks pretty cool. The original was in black and white, but the gold here really makes it pop.

For their third album, Haven goes a little more melodic and a little more progressive. You won't hear much in the way of full on power-metal-bordering-on-thrash tunes. Most of the songs are mid-paced and mellower. However, this variety gives Ayers' vocals a chance to shine as he gets to stretch himself a bit more. There's still some of the old school wails, but he also gets to be a little more reserved, a little quieter. He's got great range and this album really shows that off. I love the title track, which harkens back to the bands older material. Also, the riff in "Don't Let the Moment Slip Away" is awesome. Overall, I really enjoyed this album and I think fans of Haven will dig it too.

This album could have really benefited from some label backing - maybe a good producer to help flesh things out. Songs like "The Almighty" and "Don't Run Away" could have used more time in the cooker, I think. Also, while the remaster sounds good, the recording quality is a little bit above "demo." It's not unlistenable by any stretch, far from it. It's impressive considering this was done before ProTools and the like. But like I said, it still could have benefited from big label money. (Look at me acting like REX had money! Ha!) "From Everlasting" is a bonus track that wasn't part of the original album. It has more of an electronic feel, but it's kind of weird. There's like, casio drum beats and record scratching and guitars. The lyrics are serious but it sounds kind of silly with all these elements. Like it was a first attempt at industrial. I also wish there were some lyrics in the liner notes, but what can ya do? III probably isn't the Haven album to give to your friend who's never heard of them, but it's a treat for fans despite my pickune complaints.

Useless Fact: Not a fact...a rumination. I don't think REX would have touched this album in '95. It would have been too metal when they were focusing on hardcore and alternative. As much as I love alternative rock, that wave kept a lot of good albums from being enjoyed.