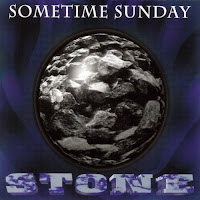 You know, we never really got any grunge in the Christian market. Sure we had alternative rock - lots of it. We had punk, post-punk, ska, swing, emo, hardcore... almost all of the music that grew up out of the ashes of the metal scene. But we never really got an honest to goodness grunge band - like a Nirvana or a Pearl Jam. The closest we came was Sometime Sunday which sounded most like Badmotorfinger-era Soundgarden. Vocalist Mikee certainly sounds the part. They've also made sure all their song titles are one word. Very important for a grunge band! The sound and production is gritty and raw. The liner notes state that there were no overdubs or anything used in the recording, so what you hear on the disc is probably what you'd hear live. I never saw them live so I can't say. The lyrics are appropriately dark and tortured, but with just enough optimism to make them viable in the Christian market. While I rib them a bit for being "Christian grunge," I think they do a pretty good job. In fact, I think that if they were on a major label with a bit more publicity they'd could have been pretty popular. I never liked their second album, Drain, but I do recommend Stone as a cool album in its own right.

Useless Fact: The band's official name for their style was "lurch rock." I admit it kind of fits their sound.
Posted by The Old Man at 7:24 PM