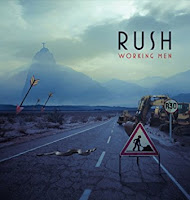 I've had this album for, like, two years. I've kind of been saving it as a placeholder in case I needed something else to review while I'm listening to other stuff. So... yeah... I'm not really ready to review a bunch of albums at present. They're really good so I want to take my time. Anyway, I bought this in an effort to get into Rush (before I bought 2112). It's a compilation of a bunch of live tracks from various places. It's okay. I wasn't really wowed and it really didn't make much of an impression on me. I much preferred the whole album more than I did this collection. It's not terrible, but if you're trying to get into Rush I'd definitely start with something like 2112 versus this.

Useless Fact: Some of the tracks are from the band's Rush In Rio album which I watched in Bible college. They put on a great show, but I really wasn't super impressed then either.
Posted by The Old Man at 10:34 AM