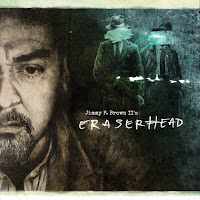 *** This review is based on a pre-release version. The album is due in the fall and I don't know if everything from the art to the track list is finalized. ***

As much I loved The Subversive Kind and its return to Deliverance's thrash roots, I've always leaned more towards the "creative years" of the band. Eraserhead has been billed as an album for fans of that era - especially since it features Manny Morales on bass and Jon Knox on drums. However, there's much more to it than that. It's somewhere between the "creative years," a heavier Jupiter VI, and Saviour Machine (along with a helping of David Bowie, naturally). Tracks like "Memoria" and "Digital Postage Stamp" sound like they could have been on an album after Camelot while "Indecisive" and "The Swell Lot of Thieves" recall Back From Mars with a bit more aggression. Speaking of "Indecisive," Manny is absolutely killing it on the bass! Terry Taylor once said of bassist Tim Chandler that he was good at filling in the cracks of songs. I think Manny is playing a similar role. He's given a lot more room to work so you hear so much more variety and melody than you might with a Deliverance album. With the album not needing to conform to any preconceptions, both Manny and Jon are let loose and as a result turn in some of the finest performances I've ever heard from either of them. Oh, and Jimmy covers a Newsboys song, "Entertaining Angels," for some reason. I've never liked the Newsboys. Ever. So when I say "holy crap Jimmy has made me like a Newsboys song" you might not understand how much of a compliment that is. I might get some hassle for saying this but I think I prefer Eraserhead over The Subversive Kind. There's just so much to dig into here and there's so much energy and heart. The album culminates in the phenomenal "The Wachers." This track is one of Jimmy's finest closers bar none. Right up there with "Sanctuary" and "In-U." It's soaring and majestic - reveling in some Saviour Machine-type theatricality. Finally, I do think that long time fans need to adjust their expectations a little. Yes, this has some influences of Deliverance, Jupiter VI, etc. - but, honestly, Eraserhead is truly its own thing meant to be taken that way. It's not River Disturbance II or Learn II so don't expect that. It's Eraserhead - and if you can handle that, you'll be able to enjoy one of the best albums you'll hear this year.

Useless Fact: "Memoria" was originally supposed to be a Deliverance track and later popped up in a different form on Fearful Symmetry's A Loss of Balance.
Posted by The Old Man at 3:48 PM