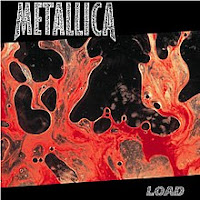 I think time has been pretty good to this album. I confess I was one of those that were originally aghast that the band had cut their hair and "sold out." Time has proven that they made the right move here. They'd pretty much done what they could do with thrash as a genre. Where do you go after Justice? Where do you go after the Black album? They had to branch out and do something else and the more hard rock, swagger of Load keeps all the aggression but allows the band do dabble in other sounds. And when that swagger works - man, it WORKS! "King Nothing" and "Bleeding Me" are prime examples. The main strike against this album is the length. At fourteen tracks and almost an hour and twenty minutes of music... well... that's a bit too much swagger for me. I think they could have lost two, three, or even four tracks off this and made a much more compact (and better) album. As it stands I really appreciate and enjoy it now. Though I still hate the cover art. And the title.

Useless Fact: If I remember correctly Load and Reload were supposed to be a double album. Which is WAY too much swagger if you ask me.
Posted by The Old Man at 5:02 PM