Sardonyx - "Sons of the Kingdom" 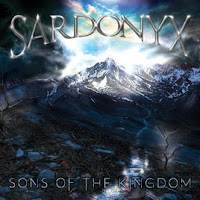 Sardonyx is back again. I always hoped they'd follow up Linear Progression but gave up after years and years went by. Yet, here they are! I've always like Sardonyx because throughout the years they've really stuck to their guns as a "ministry band." They make no bones about this and they pull no punches with their message. Anyway, unlike Linear Progression there is no nu-metal influences here. This is pure progressive/power metal. It fits nicely right after Majestic Serenity in terms of style but the production is way better this time around. If you like Sardonyx, then Sons of the Kingdom will satisfy you. It doesn't really reinvent the wheel but the instrumentation is excellent and Tom sounds as good as he ever has. "Awake" is probably my favorite track because it's basically a psalm set to music. And I mean "psalm" in the sense that it starts out soul-crushingly depressing but ends with worship. The lyrics are also extremely bold and preachy. As a Christian this doesn't bother me at all, though at times I think they're more concerned with a lyric lining up with four or five Scriptures than it making sense. Sons of the Kingdom is definitely worthy of the Sardonyx legacy and I hope it won't be another twelve or so years for the next one.

Useless Fact: "My Bride Beloved" features some female vocals from Kristen Anselmo-Hertzog. I've never heard of her before but she does a great job.
Posted by The Old Man at 3:55 PM