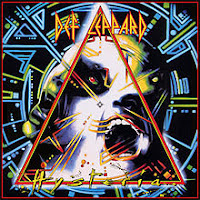 I've mentioned that back in the day, my life consisted of mostly MTV, Nintendo, Nickelodeon and church. My cousin would "babysit" me during the summers and we'd pretty much spend all day watching music videos and going to the store for penny candy. Yeah.... they don't call me "The Old Man" for nuthin'. Anyway, Def Leppard's Hysteria was quite popular at the time with "Rocket," "Love Bites," "Pour Some Sugar On Me," and the title track on regular rotation. I never had this album before but I did have a copy of Vault in college that I never replaced (it got CD rot). Instead of replacing that one I thought I'd just get the album with most of the songs I'd heard. It's pretty good. It hits all the nostalgia buttons in my brain. Though I've heard a lot of fans kind of regard this album as a huge sell-out. I guess they were a lot more metal sounding on their old stuff. This album does have a lot of super shiny, clean production and layered vocals. I had a friend that saw them in concert once and confirmed that they could not replicate those layers live. Anyway, sell-out or no, I dig it and it does make me want to explore their discography a bit.

Useless Fact:  This really isn't a fact to anyone who knows the band, but the drummer is one handed. He lost one of his arms up to the shoulder. Instead of rolling over and quitting, he devised this byzantine system of pedals to compensate and - as far as I know - is still drumming for the band to this day. That's quite a feat!
Posted by The Old Man at 10:29 AM