McKennitt, Loreena - "The Wind That Shakes the Barley" 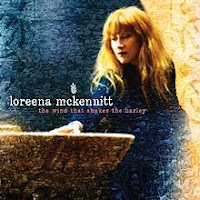 McKennitt, Loreena - The Wind That Shakes the Barley
2010, Quinlan Road

1. As I Roved Out
2. On a Bright May Morning
3. Brian Boru's March
4. Down By the Sally Gardens
5. The Star of the County Down
6. The Wind That Shakes the Barley
7. The Death of Queen Jane
8. The Emigration Tunes
9. The Parting Glass

The Wind That Shakes the Barley is a return to traditional Celtic folk songs. There's only one original here ("The Emigration Tunes"). I realized I've got some more of Loreena's music to add to the vault because I was missing quite a few. Naturally, this album is great for dark autumn mornings as you feel the chill in the air. I was disappointed that this album lacks the copious liner notes common to a McKennitt album. However, they are traditional songs so I guess there's not much to note.

Useless Fact: You know what's sad? I just recently found out she was Canadian.
Posted by The Old Man at 7:40 AM