Coheed and Cambria - "Vaxis - Act I: The Unheavenly Creatures" 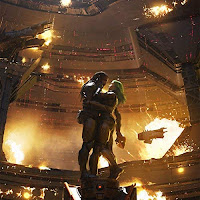 Coheed and Cambria - Vaxis - Act I: The Unheavenly Creatures
2018, Roadrunner

With Vaxis Coheed and Cambria returns to the mult-part sci-fi epics after a brief breather with The Color Before the Sun. You'd be forgiven for thinking this is a return to the Keeping Secrets and Good Apollo era upon hearing "The Dark Sentancer." It's one of those dark progressive songs which are the band's stock and trade. It's got a "No World For Tomorrow" vibe to it. Aside from that, however, I'd venture to say that this album is far more informed by Afterman and Color than most people would want to admit. For one, while the story is about being trapped on a prison planet, the album isn't really that dark. There's too much hope and Claudio's just not a wounded musician anymore - he's a family man in a happy marriage. That stuff has a tendency to brighten up your writing. I feel like this disc is a lot more focus on big hooks and strong, stand alone songs. You'll notice there's not multi-part epic here. Now... this album is amazing. Each track has a huge hook that will stick in your brain forever. "Black Sunday" and "Night-Time Walkers" are the only two songs that I didn't really care for. But two out of fifteen isn't that bad, especially since the other stuff that's here is just so good. "Unheavenly Creatures," "The Gutter," "Old Flames," man... some of the best stuff they've done. This is part one of five so I'm hoping Claudio and the boys can keep this momentum up for the next four albums. Definitely a contender for one of my picks for the year.

My wife and I sprung for the super deluxe box set for this one. It comes with a mask, a huge hardbound book with the album story and lyrics, a poster, and a black card (for VIP stuff at concerts). It's HUGE! But it's cool to have and I have to read the rest of the story.

Useless Fact: A lot of fans (myself included) suspect that maybe "The Pavillion (A Long Way Back)" was originally written for The Color Before the Sun. It's basically about Claudio wanting to quit the band so he can spend more time with his family.
Posted by The Old Man at 8:04 AM