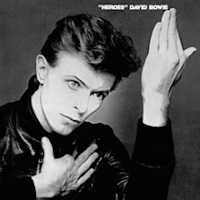 
UVULAPIE: After cruising through the absolutely stunning Hunky Dory it seems we’ve hit a wall with "Heroes."  Old Man and I keep telling each other that we need to write this review but it’s not getting done, mostly because the album is pretty weak.  Finding myself with an extreme need to avoid a current work project I decided that the time had come to kick this one off.  Soooo…. "Heroes".  One of the so-called Berlin-trilogy albums.  I’ll start off and say that the album cover reminds me of artwork from the dark Daniel Amos classic Doppleganger.  I’ll second-off and say that some of the synthesizer instrumental tracks on side two, like “Sense of Doubt”, “Moss Garden” and “Neukoln,” sound a lot like the “just messing around” crap I used to make in the late Eighties when I bought my first synthesizer.  Either I’m a genius like Bowie or Bowie was flying high and decided to record his experimenting/noodling around with this then (1977) new toy.
OLD MAN: Y'know, I really enjoyed "Heroes" at first. "Beauty and the Beast" is a cool track and I was already familiar with it through Deliverance's cover. The title track is a classic. Absolutely love "Sons of the Silent Age." Then the album kind of crashes and burns in the second half with all these ambient tracks. I mean... I feel like no one had the courage to tell Bowie "no" here. These are just boring and tedious. And there's like...four of them in a row. "Moss Garden" sounds like the generic music they would pipe in at a spa. Seriously, I was so disgusted with the back half of this disc that I didn't listen to it for a couple months. I suppose if I wanted to play devil's advocate I could say these probably have some kind of connection to World War II and the bombing of Hiroshima and Nagasaki. Doesn't make them any less boring. The last track, "The Secret Life of Arabia," is not ambient (thank goodness!) but it's almost an afterthought. The song (and the album) just sort of peter out. Like "I guess we're done here" - fade out. I guess when you have a reputation as a "risk taker" that must means some risks don't really pay off.
UVULAPIE:  I will say that the album, as a whole, is dark and twitchy, similar to what I suspect a drug addiction would be like.  There’s pretty much just half an album here which means I’m comfortable with just writing half a review.
OLD MAN: Word.
Useless Fact: "Heroes" (the song) was inspired by Bowie watching his producer and his mistress at the Berlin Wall.
Posted by The Old Man at 10:11 AM