Gama Bomb - "Speed Between the Lines" 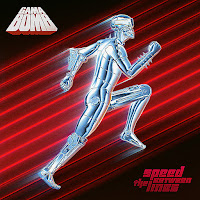 Hey, I finally got ahead of the curve on a Gama Bomb album! It's a good thing too because I think this is their best so far. That's high praise considering I thought Untouchable Glory was their best. I've mentioned a time or two about the band sometimes having problems making each song distinct. Well... they've long since gotten over that. Every song here stands out and has a catchy chorus or gang vocal that sticks in your brain. Dare I say there's even a little bit of progressiveness in "Alt-Reich." Maybe. Just a drop. "Alt-Reich" is also an example of a lot more socially conscious lyrics on this release. The band has always had a track or two like that but I think it's a lot more prevalent. here. "Alt-Reich," "We R Going 2 Eat U," and "World Gone to Hell" are the best examples. As much as I like the nostalgia, horror, and silliness, it's cool to hear some tracks that are vicious and fast but also carry a message (that I agree with more often than not). It's actually very in line with old school thrash which could be very socially conscious at times (just look at some old Anthrax records). Every time a new album comes out I always think about when I said I didn't know if wanted album after album of this in my Citizen Brain review. I was so wrong. As long as the band stays this awesome I will never tire of it.

Useless Fact: The liner notes in this album are inspired by the covers of old pulp novels. I kind of wish they would have put lyrics in their too, though.
Posted by The Old Man at 7:58 AM