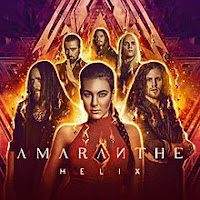 I was a little concerned about this album at first. Neither single, "365" nor "Countdown," seemed to really do anything for me. I didn't think they were bad, just unremarkable maybe. Thankfully, all my fears were laid to rest listening to the album itself. Even those two tracks were a lot better in the context of the whole album. Helix continues to work the ground laid down by Massive Addictive (where they really defined their sound) and refined on Maximalism. New vocalist Nils Molin is a suitable replacement for Jake E. Though I do miss him. I can't tell if I prefer Jake to Nils or if I'm just old and resistant to change. The Rock Critic said once that it's okay to be a one trick pony as long as you're really good at your trick. Amaranthe proves that they are the absolute masters of their trick. Occasionally I wonder if they'll be able to keep up this level of consistency and quality. I also wonder if I'll ever get tired of their "trick." Though, it's been several albums and I still can't get enough of Gama Bomb's trick. And as Helix has demonstrated to me - I can't get enough of Amaranthe's trick either, so who knows?

Useless Fact: My CD comes with two acoustic bonus tracks. I didn't have a chance to listen to them because I forgot they were on the CD proper and not part of the album download. Also, Itunes will import "Say the Word" as "Helix."
Posted by The Old Man at 7:50 AM