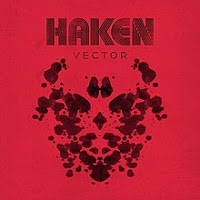 Where to go after the Eighties love-fest that was Affinity? Apparently, you go back to being heavy. Vector is the heaviest and most aggressive album since Visions. I am okay with this, by the way. The songs are dense, knotted compositions, full of heavy riffs, poly-rhythms, and everything you've come to expect from Haken. I also think there's a bit more in the way of hooks here than there was on Affinity. Also noteworthy, this album is pretty short for Haken. At seven songs (with one being an ambient intro track) and a scant 48 minutes, I think this is the band's shortest full-length album. However, I think the brevity works in the album's favor. The cram a lot in those 48 minutes so you're still getting a full meal. I'm just glad I can listen to the whole thing on the way to and back from work. Vector hasn't overtaken The Mountain but it's immensely enjoyable.

Useless Fact: There's a story here somewhere about a doctor in an asylum performing dubious experiments. Though there's a lot of room for interpretation as to what it's actually about and what is happening.
Posted by The Old Man at 8:08 AM