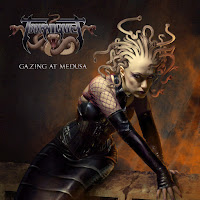 1. Sinister Scherzo
2. Longing For Gondwanaland
3. Memento Mori
4. All Good Things Died Here
5. The Crushing Weight of Eternity
6. The Peaceful Beauty of Brutal Justice
7. Can't Make Me Hate You
8. One Foot In Forever
9. Gazing At Medusa

Gazing At Medusa hearkens back to the early days of Tourniquet. Not so much in the sound (though we will get to that in a minute) but more in concept I guess. Someone on a Facebook group described it as "nine metal tunes." He wasn't being disparaging. This was evidenced after the title track released and it's simple structure and melodic vocals gave me major Stop the Bleeding vibes (especially the album having snake-themed cover art). After years of Tourniquet playing up the whole progressive thing, it's nice to go back to just having nine metal tunes. The progressiveness is scaled back a bit as is the overall run time. This is another case where brevity helps the album. With the departure of Luke Easter, Tim "Ripper" Owens (of Judas Priest and Iced Earth fame) steps in for vocals. Owens has a bit more range and can do those high registers that Guy Ritter used to do on the older albums. This is no offense to Luke, of course - I really like Luke! But Owen's increased range is another factor that makes this album feel a little old school. Also - no medical terms. The over-arching theme seems to be mortality, eternity, and making the most of one's time on earth. I'm not sure Gazing At Medusa will be remembered as a landmark album or anything, but it doesn't need to be. It's nine solid metal tunes and it's well worth your time.

Useless Fact: Owens does not sing the title track. Those vocal duties are handled by Dean Castronovo. Chris Poland (ex-Megadeth) handles guitar leads. Aaron Guerra is still on rhythm guitar.
Posted by The Old Man at 7:51 AM