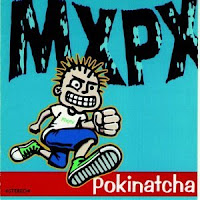 MxPx's debut, Pokinatcha, is missing a lot of the spit-shine and polish of Teenage Politics and Life in General. The sound is dirty, raw, and sloppy. And fast! Most tracks race along at full speed, rarely stopping to take a breath except for a few moments. Those moments being "Wantad" and "Bad Hair Day" for which the band received some buzz back in the day. I don't know though... I think I like my MxPx with a bit more polish. While the sound may be raw, the lyrics are not. They're pretty suburban teenage Christian with a little angst. Not that there's anything wrong with that - that was kind of their thing. It's worth a listen, but I prefer their later albums (i.e. the ones I mentioned, not their later - later material where they were really super duper polished and commercial).

Useless Fact: As I recall the band was originally called Magnified Plaid. It even says that on the spine of this album. However, drummer Yuri was prone to abbreviating it M.P. but with x's instead of periods. So they eventually became known as MxPx. Also, I read in an interview once that the word "pokinatcha" was from a Snickers commercial or something where the narrator says hunger is "pokin' at ya."
Posted by The Old Man at 7:49 AM