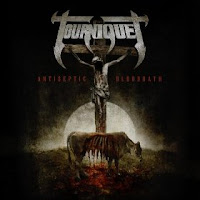 1. Chart of the Elements (Lincchostbllis)
2. Antiseptic Bloodbath
3. The Maiden Who Slept in the Glass Coffin
4. Chamunda Temple Stampede
5. Flowering Cadaver
6. 86 Bullets
7. Duplicitous Endeavor
8. Lost Language of the Andamans
9. Carried Away on Uncertain Wings
10. Fed By Ravens, Eaten By Vultures

You know that saying that goes "something is more than the sum of its parts?" What's the inverse of that? The sum is less than each of its parts? That's how I felt about the new Tourniquet album at first. It seemed like, much like Telescopic Realm the songs were sort of stitched together. However, unlike that album, the parts are a lot more compelling. As a result I listened to this album over and over until I could finally see the "big picture" and the songs came together. The songs are filled with killer riffs, classical parts, odd time signatures, and some off-the-wall bizarre stuff like the cheer-leading intro on the first track. I think having a good producer helped smooth all the parts together. All in all - I'm really impressed. It's been nine years since Where Moth and Rust Destroy but Antiseptic Bloodbath feels more vibrant and certainly heavier than the band has been in quite a while. Ted Kirkpatrick is still using that dirty, fuzzy tone from that Orange amp he loves so much but the production cleans it up and gives it some weight. The result is an awesome fat tone that is good and heavy with a nice crunch. Speaking of the production - it is stellar. Especially considering this is a Kickstarter funded release. There was a little bit of controversy surrounding the actual amount asked for ($30,000 I believe). I don't know how much money it actually takes to make an album but the money wasn't wasted, that's for sure. Everything from the sound quality to the CD packaging is top notch. This is seriously a great album and will be jockeying for a spot on my picks of the year!

Oh, one quick complaint. I don't like the name "Antiseptic Bloodbath." Yes, I know what the band is trying to say and I respect that. It's really the words themselves seem kind of silly. I can picture a group of young teenagers listening to Metallica and trying to think up a name for their band. "Yeah, man, how about ANTISEPTIC BLOODBATH!" "Oh, that's so rad!" So yeah... I think it's kind of cheesy, but that's just me. Like I said, though, awesome album!

Useless Fact: The album features several guest guitarists including ex-Megadeth shredder Marty Friedman who returns to whip up a few face-melters.
Posted by The Old Man at 10:40 PM