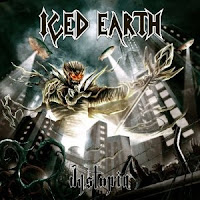 "I though you didn't like Iced Earth?" asked my wife after she found out I bought this CD. I had to inform her that that wasn't true. I like Iced Earth just fine when they're singing about something interesting. I've always loved Jon Schaffer's warp-speed riffs. Anyway, I was on vacation with some cash burning a hole in my pocket and I bought this. Dystopias, huh? Well... that could be interesting. As you can guess, the theme of this album concerns various dystopias in pop culture from V for Vendetta ("V") to Dark City ("Dark City"... duh). It definitely leans toward "book report" lyrics though. There's nothing here that's terribly thought provoking or memorable but nothing bad or cheesy either. Although Jon has some fascination with single mothers on this disc because they're mentioned in, like, three separate songs. The music is just alright as well. There are a lot of mid-paced songs which made me sad because, as I said, Jon is the master of super-fast picking. There are a couple of fast tracks ("Boiling Point" and "Days of Rage" specifically) but not as much as I would have hoped. New vocalist Stu Block does an admirable job on vocals. He sounds like a cross between Matt Barlow (in the lower register) and Tim "Ripper" Owens (in the upper register). Nothing to complain about there. Frankly, Dystopia is a perfectly pleasant metal album but it's nothing ground-breaking.

So... here's an update. I wrote the above a long time ago. I recently gave this one another shot because I've been reading how people say it's one of their best. Well... yes. They are correct. This is way better than I originally gave it credit for. I'm not sure what my problem was. Oh, and I also don't know where I got the whole "single mother" thing - it's just in "Anthem." Though I may have just assumed "Anguish of Youth" was about that too. Ugh! I'm keeping this up here, but I'm a little embarrassed. Oh well...  I like it plenty now!

Useless Fact: There is a special edition of this album with some extra tracks: "Soylent Green," "Iron Will," and another mix of "Anthem."
Posted by The Old Man at 8:15 PM