In Flames - "Sounds of a Playground Fading" 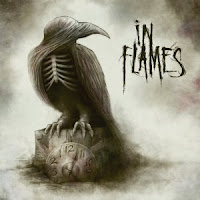 In Flames - Sounds of a Playground Fading
2011, Century

Sounds of a Playground Fading was another vacation purchase. From the samples I listened too I was really impressed at the melodies and the riffs. I think In Flames was more of a metalcore/death metal band but on this album they boarder on old-school thrash. The vocals do have a hard core influence but they don't get on my nerves like most hardcore vocals. While I really enjoyed this on my first few listens, I found that I didn't want to go back to it as much. I have no idea why though. It's not bad - I just don't feel like listening to it. I will say that the production is a bit loud. The guitars are down-tuned and sometimes they're so low that you can't really hear the riffs. The album is full of good hooks though and still sounds pretty commercial despite the heaviness. Hopefully, I'll get over whatever bug I have up my butt about this album and start to enjoy it more. Cool cover art, by the way!

Useless Fact: One of this band's past albums was called Whoracle. I'm sure it was a concept album but I have no idea what is about. With a name like that the mind can only wonder!
Posted by The Old Man at 6:58 PM