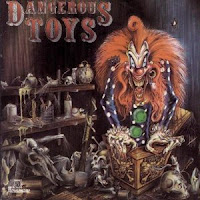 So not too long ago I had the hankerin' for some good old tyme 80's sleazy hair metal. You know the kind where, by just looking at the cover, your hair becomes stringy and greasy and you detect the faint odor of whiskey and feet. Yes, that kind of music is what I was craving. So I searched around in my memory banks and pulled up a memory of Dangerous Toys. They were exactly the band I was looking for. You can't get any sleazier than "Take Me Drunk" or "Sport'n a Woody." I think it really takes a certain kind of bravery to release songs like that. I may be unclear about the meaning of the word "bravery." Anyway, while the lyrical themes range from deplorable to vulgar the boys know how to write a song. Each tune has a great hook, cool riffs, and attitude. I think this may be some sort of concept album about the human condition. I know that's stretching it a bit, but there's some liner notes which lead me to think this might be more than it seems. I don't know if I'd even listen to something like this now but it does bring back memories. Speaking of which....

My cousin was the first to get this on tape. We were on vacation in Rochester, NY and we both got tapes. I go some rap tape (Kwame, I think it was). So we were looking at our tapes, basking in the ambiance as it were, when my mom's friend snatches away the Dangerous Toys liner notes and proceeds to read the lyrics to "Take Me Drunk" in front of everyone. My cousin and I were horrified - mostly because we thought our parents would take the tape away. Here's the odd thing - they didn't, nor did they really say anything. So we both got to enjoy Dangerous Toys for the duration of the trip.

Useless Fact: The band made a video for "Teas'n, Pleas'n" that was pretty popular on MTV. They released two more albums before going all modern with their last album.
Posted by The Old Man at 10:05 AM