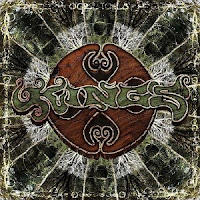 When Ogre Tones first came out I was dating my wife. I remember listening to it and freaking out one evening because she didn't call me back or something. I was really worried that night - for no reason apparently! Anyway, I loved Ogre Tones back then. I remember Dug saying this album was supposed to sound like a combination of Dogman and Gretchen. Of course, Dug was in the habit of saying that about any King's X album that was coming out at the time. I would say it's a bit more like Out of the Silent Planet as it showcases the band's distinctive style but remains fairly simple and radio-friendly throughout. They've even included a reprise of "Goldilox." "Honesty" is a Ty Tabor penned acoustic ballad that is simply beautiful and the album as a whole is full of groove and great harmonies. The only song I don't care for is "Open My Eyes." Aside from a cool riff I think it's kind of boring. I got rid of this awhile back because it made me depressed for some reason. However, now I listen to it and think "What made me depressed?! This album is awesome!" I would go so far as to say this is one of the finest of the later-era King's X releases.

Useless Fact: The band made a video for "Alone" that is... interesting. It's just the guys playing the song with some video hos dancing with them. Also, I recall that the original title was Overtones but I think the label thought that was too plain.
Posted by The Old Man at 11:04 AM