Cooper, Alice - "Welcome To My Nightmare" 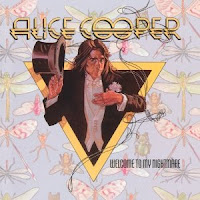 This is the one. This is the album that finally converted me fully into an Alice Cooper fan. I've reviewed several albums of his this year and they've been good. However, it was Welcome To My Nightmare that finally pushed me over the edge (in a good way). I remember seeing the video to the title track on MTV. It was Halloween I think and they had Freddy as a vj. It was a very unsettling video and that vibe permeates the entire album. The story involves a boy (or man?) named Steven who is trapped in a dream world (maybe?) where he suffers torture and does horrible things. It's very effective, especially with the late Vincent Price lending a crazy monologue in "Devil's Food." The album is a lot more diverse than the Alice Cooper band platters. It's like a creepy Broadway musical mixed with good old Detroit guitar rock.

Now, after having heard this one I can see why some would be disappointed with Welcome 2 My Nightmare. The tone is distinctly lighter on the new album. Where the original is a terrifying journey into madness, 2 is a sort of fun, creepy collection of (very good) pop songs.

Useless Fact: "Only Women Bleed" did real good I hear.
Posted by The Old Man at 8:50 PM