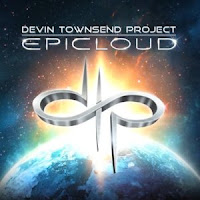 The Devin Townsend Project - Epicloud
2012, Inside Out

It's always nice to have some new Devin. After finishing his four album cycle, Devin regrouped and released Epicloud. Rumor has it he was trying to write for the next Ziltoid album but all these pop songs kept coming out, and so we have Epicloud. Or perhaps you could call it Addicted! 2 as it sounds similar in that it retains Devin's trademark styles but is also very accessible. It's a pretty decent mix of all his moods. You've got some more progressive tunes like "True North" and "Grace." There are some sort of Enya-core songs like "Where We Belong" and "Save Us Now" as well as some straight-forward rockers like "Lucky Animals" and "More!." Epicloud is exactly the right word to describe this album. There's a gospel choir to go with the huge production making everything sound... well... EPIC. And LOUD. While I do enjoy it, I'm not quite as over-the-moon with it as I was with Addicted! I think part of the reason is that Addicted! hit its groove pretty early and never let up until the closing notes, which made for a supremely enjoying album. I don't think this one quite hits its mark. The songs are great, for sure, but I don't think the whole thing comes together as quite the package of the previous releases. As a result it almost feels like something's missing. That's not to say it's bad, not at all. I think the songs themselves are great except "Liberation" which kind of annoys me for some reason. Also, I like "Grace" but I think it's plodding pace and more progressive nature goes against the accessible pop nature of the rest of the tracks. In other words, it breaks the groove.

The special edition of Epicloud comes with a bonus disc with ten demos. Some were supposed to appear on the album proper, while others were bits and pieces of other ideas. The songs are unfinished but, honestly, you'd probably never know as most seem pretty complete to me. In fact, if it were my record, I think I might have switched out some of the main tracks for some of these. It might have improved the unity of the disc.

Useless Fact: Devin did a "video" for "Lucky Animals" in which he danced, poorly, I might add. However, that was just to prompt fans to film their own video for the song. The fan-shot footage will be used in the official video.
Posted by The Old Man at 1:19 PM