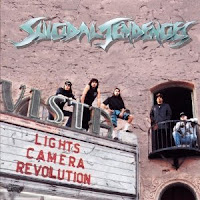 Suicidal Tendencies was a band I never touched with a ten-foot pole. Nay, even in my Metallica loving youth. As relaxed and groovy as my mom was I don't think she would have ever responded well to me asking, "Hey mom, can I have some Suicidal Tendencies?" Also, they are called Suicidal Tendencies. One day I was just window shopping for some new music and I decided to check them out. They're actually not as bad as their name might imply. This particular album is a bay area thrash/punk fusion similar to D.R.I. or The Crucified. I think it's their third or forth album and they've got their sound nailed down, resulting in some high quality thrash. They've got a healthy dose of humor as well ("You wouldn't know crazy if Charles Manson was eating Fruit Loops on your front porch!"). "Send Me Your Money" is the obligatory anti-80's televangelist song. I think it was a law back then to have at least one of these types of songs on your album. Anyway, I don't think I'm gonna rush right out and collect all the band's back catalog, but I'm glad I added Lights...Camera...Revolution to my collection.

Useless Fact: The band is most famous for "Institutionalized" from their self-titled debut. If you ever hear someone yell, "I JUST WANTED A PEPSI! ALL I WANTED WAS A PEPSI!" they're probably referencing that song. Also, Suicidal main man "Cyco" Mike Muir has worked with P.O.D.