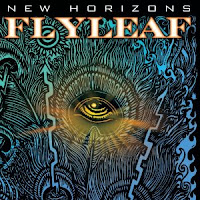 It's very rare that I'm able to form an opinion about a new release so quickly. However, upon listening to New Horizons for the first time I thought to myself, "Um... what happened here?" The album starts off really well. The three opening tracks are unique and full of passion. "Call You Out" reminds me a bit of "Breathe Today" from the debut. Unfortunately, after a strong start the album falls apart. It reverts to this standard Christian modern rock sound that feels tired and uninspired. Subsequent listens have not changed my mind any. My wife says I'm being too hard on them but I disagree. Both the debut and Memento Mori were both really good. They had a nice intensity about them that New Horizons lacks. If this is the "new horizon" to which the band is headed then I may have to get off at this stop because it's not very interesting.

Useless Fact: This will be founding vocalist Lacey Sturm's last album with the band. The story goes that after the band's former producer was killed in a car crash, Lacey had a "Memento Mori" moment. Realizing she wanted to spend more time with her new baby and husband, she decided to leave the band. They've got a replacement but she sounds kind of generic in the samples I've heard. Though, to be fair, it's a little too early to judge.
Posted by The Old Man at 6:26 PM