Fall Out Boy - "Save Rock And Roll" 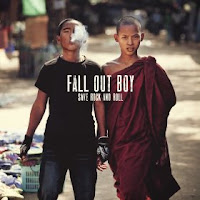 Save Rock And Roll huh? First, I wasn't aware that rock and roll was in danger. Second, even if it were I don't think I'd trust its salvation to Fall Out Boy. Especially with the least "rock and roll" album the band has made up until now. It's got some lame flavor-of-the-month guest stars. It's also got Courtney Love and Elton John. Courtney's job on "Rat a Tat" is to be vulgar and see how many times she can fit the words "suicide," "blonde," and "bomb" in the lyrics. Elton John's job is to make you go - "WTF? Why is Elton John here?!" But I'm not here to hate folks, so I'll answer the question I'm sure you're asking - "Is it any good?" Let me answer it this way...

You know McDonald's right? Sometimes you just get a craving for a McDouble or fries. Or maybe it's breakfast time and it's the closest thing there is. Whatever draws you to the Golden Arches is immaterial. You know exactly what you're going to get. It won't be "delicious" and you certainly won't "savor" it, but it will do exactly what you need it to do - take up space in your stomach. Likewise, sometimes I get a craving for easily digestible pop music with good hooks that I don't have to think too hard about. That's where Fall Out Boy comes in. I listen to it because I know exactly what I'm getting and sometimes it hits the spot. Some people say this album is really different, but it's not. It's the exact same band only instead of guitar there's more pop noise and no stupid song titles. The strongest tracks are probably "Miss Missing You" and "Young Volcanoes." Those are my favorites anyway. So yeah... Fall Out Boy... the Big Mac of pop music.

Useless Fact: I'm not really sure what's going on with the cover art. Also.... Elton John sings on the title track. Yeah. ELTON JOHN. I wonder if he was drunk or confused or what?