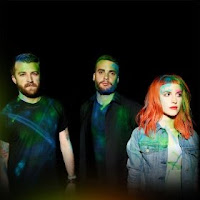 Well it's been a good four years since the last Paramore album. The band has been through a lot in that four years - losing members, etc. It's good to see they didn't call it quits because I've always liked them. I read in an interview that no ideas were off the table when making this record. It shows... seriously, seventeen tracks? Wow! I can imagine them sitting around a table, wild with ideas. A fuzz-filled bass track? Yeah! Hawaiian ukulele interludes? Yes! An 80's tinged gospel pop song? Yep! A lounge flavored soft tune? Why not? An epic shoegazer-inspired finale? Sure! All of this diversity, mixed with some more traditional sounding songs create a fun and diverse album that is really a pleasure to listen to. Hayley Williams has one of the best voices in pop music today. She is equally at home with simple pop songs like "Still Into You" as well as the hard rockers like "Anklebiters." I will say I would have liked to have a nice acoustic song like "Misguided Ghosts" but we do get "I Hate To See Your Heart Break" - a nice sensitive ballad. Speaking of which, it reminded me of Starflyer 59's "She Was My Sweetheart" and I wouldn't be surprised if the band wasn't maybe listening to both Silver and Gold as I think some of those discs influenced this album's sound. Nowhere is this more apparent than the aforementioned epic closer "Future." It starts mellow enough but builds up into a distorted wall of fury that lasts over seven minutes. I have to respect the band for pulling something like that off. The only track I don't care fore is "Daydreaming." It's kind of boring and almost sounds like it could have been on the band's debut, which if you'll remember, I didn't care much for. That being said, Paramore is proving to be one of those rare bands that is only getting better with age. I don't get to say this about a lot of albums, but I say with confidence: Paramore is the band's best album yet.

Useless Fact: Hayley wrote "Hate To See Your Heart Break" for one of the other band members when Paramore was considering calling it quits. He was sad that he wouldn't be able to see his friend and band-mate after the break up.
Posted by The Old Man at 8:33 PM