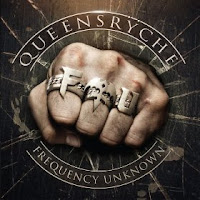 So I guess there are two Queensryches now. One of them features most of the original musicians and new singer Todd LaTorre and is releasing an album in June. The other one features vocalist Geoff Tate and whoever can stand to be around Geoff Tate long enough to release an album. Tate's version, Tatesryche recorded Frequency Unknown in six weeks or so and shoehorned it onto shelves. I guess Geoff just had to beat the other guys to the punch. I picked this up because I was kind of hopeful. I was hopeful that Geoff would really bring his A-game. I was hoping he'd give us this dark, progressive album that truly tested his own mettle and challenged the boundaries of music like he's always claiming. I was hoping he would totally rock this and out of all the feuding and nonsense we'd get two awesome Queensryche albums. Unfortunately, that is not what happened...

See, if you're going to show up your former band-mates  I would think you would want your absolute best songs. I would think you'd want to wait for the competition to go first, giving you the edge. I would also think you would make an album that was...y'know... really good. Frequency Unknown isn't awful but it's just so full of wasted potential. While I like quite a few of the tracks, nothing really rises above "average." "In The Hands Of God" and "The Weight of the World" are two exceptions that could have been really awesome if more time would have been taken. But who am I kidding? That's pretty much the story of this album - a complete rush job using the Queensryche name to spite Geoff's former band-mates. "Dare" is quite clearly aimed at the other guys. It's all kind of juvenile if you ask me. Especially since Queensryche has always been known as an intellectual band.  Also, Geoff's voice has not aged well. He sounds shaky and strained throughout the disc. This is not the album you put out if you're trying to lay claim to the true 'Ryche throne.

And as if that wasn't enough, the album includes a few re-recorded versions of 'Ryche classics. Naturally, all this does is to showcase how flaccid the preceding material really is. It also pretty much puts to rest any notion that Geoff can still sing rock. During "I Don't Believe In Love" as the song builds up to the rippin' chorus, Geoff can't even be bothered to sing it. The vocals just drop out into background vox. Lame. Totally lame.

Useless Fact: I think the other band was originally going to let Tate keep the name. They were known as Rising West for awhile. Also, in case anyone missed it: Frequency Unknown.... F.U.... yeah... you stay classy Geoff. *rolls eyes*
Posted by The Old Man at 8:47 PM