Amon Amarth - "Deceiver of the Gods" 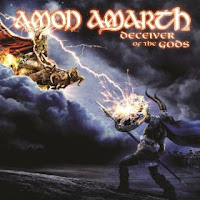 Hey kids! Did you like the movie Thor? Would you like to hear an album about it? Actually, that's not really fair. Amon Amarth have been doing death metal about Norse gods for years before the movie. I heard one of their better known songs, "Cry of the Black Bird," a long time ago but it never did anything for me. So motivated me to buy this? Um... I blame the cover. It's cool. Also, it was cheap and I didn't have money to buy any of the new Daniel Amos stuff. As luck would have it, I quite enjoy Deceiver of the Gods. It's got growly vocals aplenty but it also has a lot of melody and NWOBHM sensibility. It makes the songs a lot more interesting as they're not all about blast beats and downtuned noise. In fact, quite a few of these songs are catchy indeed. As I understand it this album marks an evolution of the band's sound. I'm not sure how long time fans would react, but I love this stuff.

Useless Fact: Amon Amarth comes from J.R.R. Tolkien's Lord of the Rings. It's the Sindarin (his made up elf language) word for Mount Doom.
Posted by The Old Man at 9:05 PM