The Flower Kings - "The Rainmaker" 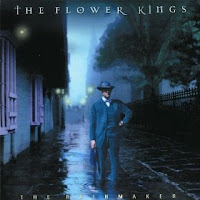 The Flower Kings - The Rainmaker
2001, Inside Out

I had no idea what to expect when I started listening to The Flower Kings. I'd heard of them before but never given them a listen. Most of the reviews of this disc say it's one of their weaker ones. Figures, I'd love it. It's good progressive rock but whereas most of the progressive stuff I usually listen to is rooted in metal, this is more rooted in 70's prog-rock bands like Yes, Genesis, and Pink Floyd. Of course there's the crazy virtuoso playing, but there's also a good sense of melody too. The vocalist definitely has a bit of a Roger Waters sound to him. Some of the softer guitar parts almost sound like the music they use to play on the Weather Channel when the local forecast popped up. Oh... that's a good thing. I always liked that guitar stuff, oddly enough. "City of God" is particularly 70's-ish, but again, in a good way. A way that makes me vaguely nostalgic. The Rainmaker is definitely a solid progressive rock album and I'm looking forward to diving into some of their other stuff.

Useless Fact: I don't really know this band well enough to tell you anything interesting.
Posted by The Old Man at 4:25 PM