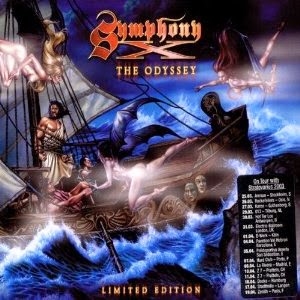 After listening to and loving the monster album that was Iconoclast I decided to check out some older X. The Odyssey lays the groundwork for that dark metal juggernaut by being reportedly a good deal heavier than their previous outings. However, it's still very much progressive with all the hallmarks of the genre. I would be remiss not to mention "The Odyssey" - a twenty-plus minute epic based on the epic poem of the same name. Some superb guitar work here, for sure. Face-melting leads abound! Russell Allen is a fantastic vocalist with a great range. He can go from snarling thrasher to power metal wailer to melodic crooner... sometimes in the same song. I confess this album was a little bit of a grower for me, but remains a textbook example of progressive metal.

Useless Fact: My edition came with not only the lyrics but also liner notes covering each song. I wish every album would do that.
Posted by The Old Man at 10:25 AM