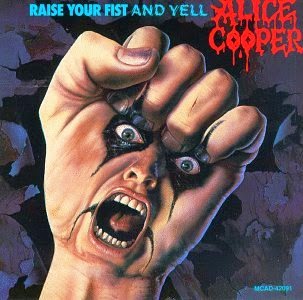 Remember way, way back in my review of Firehouse's debut album where I talked about how they were an example of everything that was good about Eighties hard rock? Well, here's another good example. The Coop continued the direction he'd begun in Constrictor with Raise Your Fist and Yell. It's textbook Eighties hard rock... in a good way. The riffs are fast and furious. The songs are to the point and catchy. I'm kind of surprised by how heavy this is. I mean, it's not Brutal Planet heavy, but it's pretty heavy considering the time. You know from the opening notes of "Freedom" that the Coop has arrived and he's taking no prisoners! The mood is appropriately dark as well. I would say it's essential listening for Halloween. Or possibly before or after a horror movie marathon. Now I never heard this album when it originally came out but listening to it totally activates my Eighties nostalgia chip. Especially the during the heyday of slasher movies and what not. Hey, remember when they used to market stuff from Friday the 13th and Nightmare on Elm Street to kids? Remember how, for the most part, parents were okay with it? It was just part of popular culture back then and I don't think people were so worried about how it would effect children. Weird. Anyway, this is definitely one of the best Cooper platters I've listened to.

Useless Fact: I think "Freedom" was the hit off this album.
Posted by The Old Man at 9:09 AM