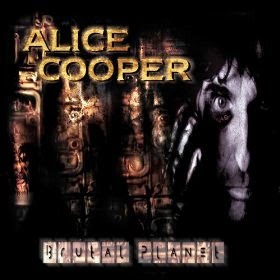 A friend in college gave me a copy of Brutal Planet and I think it was my first exposure to Alice Cooper. I think I still have that burned copy somewhere. Anyway, I liked it then but for some reason or another lost track of it. Sometimes I am a crazy person who loses track of good music. Anyway, this disc is absolutely the heaviest thing the Coop has done. It's got thick, chunky guitars, and heavy production. There's a bit of a nu-metal vibe here, I think. The songs are immensely catchy with most being up-tempo rockers. It's probably one of the darkest albums Alice has recorded, thematically speaking, but it's also (ironically enough) one of his most Christian.

Useless Fact: This album and the next, Dragontown form sort of a duology as it's been said that Dragontown is the worst city on Brutal Planet.
Posted by The Old Man at 10:19 AM