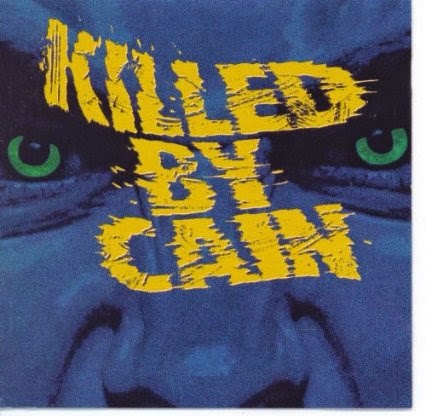 Someone on a Facebook group posted a picture of this album. I suddenly remembered that Killed By Cain were actually a thing and that I had owned this particular disc (well... tape). I also remember my impressions of it being "okay, but not a frequent player." Definitely wasn't over the moon for them originally. So I bought it again to see how time has treated it. Well, like a lot of albums I rediscover, I enjoyed it more the second time around. It's has kind of that Snakes-era Bride shimmy and shake vibe but much less commercial and much more metal. The vocalist sounds like both Axl Rose (in his lower register) and the vocalist from Dangerous Toys (whose name escapes me). There's a bit of Black Sabbath in here as well with slower, doomier guitar riffs. I love the acoustic track, "Sin City." I think Killed By Cain were another band who were victims of their time. '93 was not a good year for a metal band to put out a debut album. While I don't think there's anything particularly spectacular about this disc, I think they had a lot of potential and it's too bad they never got to do a second album.

Back in the old days of the Deliverance message board Dion, from Hot Pink Turtle, had a funny story of Killed By Cain at Cornerstone. Apparently the power kept shutting off as they were trying to start their show. Each time the vocalist grew less and less enthused with his opening line.

Useless Fact: Dale Thompson of Bride produced which probably accounts for any similarities. Also, drummer Stephan Rolland was Bride's drummer on the Silence is Madness album.
Posted by The Old Man at 11:14 AM